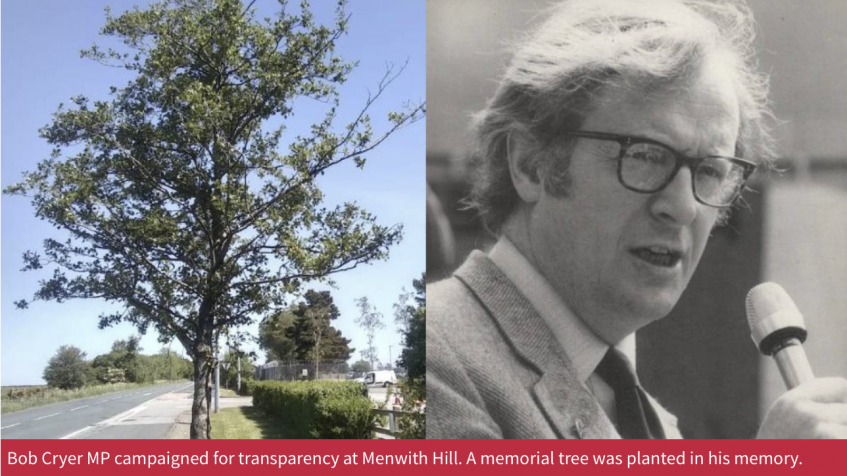 Bob Cryer MP campaigned for transparency at Menwith Hill. A memorial tree was planted in his memory.

Former Labour MP Ann Cryer has said she is “very upset” at plans to remove a memorial tree dedicated to her late husband at an entrance of RAF Menwith Hill in Nidderdale.

Bob Cryer, who was the Labour MP for Bradford South, died in a car accident in 1994.

He campaigned for transparency at Menwith Hill and secured a debate in parliament a few months before he died when he claimed the aim of the base was to “assert and retain United States supremacy”.

The Ministry of Defence, which owns the site, has submitted plans to Harrogate Borough Council to add a new visitor centre, vehicle canopy and changes to the road junction on Menwith Hill Road.

However, this would involve removing the alder tree planted and dedicated to Mr Cryer in 1994. The tree is planted alongside the public highway and is not owned by the MOD.

Ms Cryer, who was MP for Keighley from 1997 until 2010, told the Stray Ferret the plans to remove the tree were “very worrying”.

She said: “I feel quite hurt that they would disregard something like this. If they are removing the tree you would think someone would contact me. I am very upset and would like a response and an apology from the people at the base.

“It’s not just about the tree, it’s about the people that lie behind it.”

Originally positioned to the east of the entrance, the tree was dug up when new slip roads were incorporated. It was replanted and rededicated by Ms Cryer in October 2002.

‘A mockery of defence’

There are now at least 38 ‘golf balls’ at the site.Built in the 1950s on the edge of Nidderdale, Menwith Hill is the United States’ largest overseas surveillance base. Giant radomes, or ‘golf balls’, are a distinctive feature of the site.There have been several applications in recent years to expand the base and add more golf balls. Each time, the MOD says expansion is needed for security and defence reasons, which Ms Cryer questioned.

“Menwith Hill makes a mockery of defence and is an appalling breach of our democracy.

“It’s always been the source of anxiety for myself and others. Why do they need to expand?”

“Bob was so cross that a beautiful part of England has been used in this way.”

Sarah Swift, from the Menwith Hill Accountability Campaign group, has objected to Harrogate Borough Council about the plans to remove the tree.As part of the planning application, the MOD commissioned a tree survey that did not recognise the significance of the memorial tree and placed it in the ‘C category’, which it described as being of ‘low quality and value’.Ms Swift also told the Stray Ferret that several plaques that were attached to the tree have been mysteriously removed in recent years.

She added: “Bob Cryer was tireless in his efforts to bring public and parliamentary scrutiny to the activities of Menwith Hill.”

When the tree was replanted in 2002, and an image of the now missing plaque. Credit: Alastair Hurley

A Harrogate Borough Council spokesman said:“We are working with our colleagues in the arboriculture team, and applicant, to find a solution for the memorial tree at Menwith Hill.”

An MOD spokesperson said: “Planning matters are a matter for the local authority who will make a decision on the Menwith Hill application in due course.

“Nevertheless, the MOD have been made aware of some concerns raised by a member of the public and as a matter of course will be looking into them, however, it would be inappropriate to comment further at this time.”