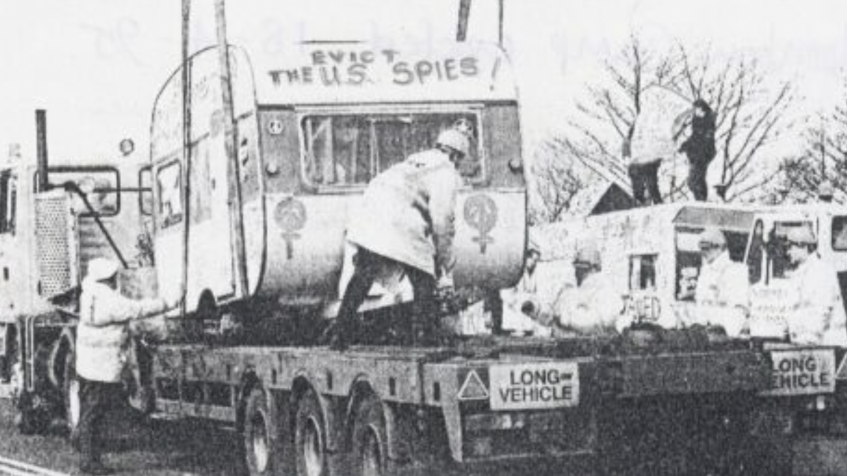 A brief history of The Menwith Hill Accountability Campaign.

For well over 60 years, a dedicated group of concerned citizens has been keeping an eye on, and working to bring to account, those peolpe who keep an eye on us; namely NSA Menwith Hill near Harrogate North Yorkshire. The focus on Menwith Hill has been because many of us live locally. However The Campaign for the Accountability of American Bases (CAAB) extended the campaign to bring public scrutiny, awareness and accountability of the role and presence of the all US Visiting Forces and their Agencies here and world wide.

From the start, when the US Army arrived in 1951, local people raised their concerns. In the 1980s Otley Peace Action Group continued their work and campaigned tirelessly to raise the profile of this US base. They worked in many different ways. Inclusive peace camps were set up, demonstrations were organised (6,000 people attending in the early 1980s) and creative and effective ways were tried. Gradually through their work more people became aware of NSA Menwith Hill.

Menwith Hill is run by the National Security Agency of America and is the largest intelligence gathering and surveillance US base outside America. What goes on there is secret, unaccountable and out of control of the UK government (despite what they say!).

A campaign with the word FOR in the title instead of AGAINST was important and the word ‘ACCOUNTABILITY’ was beginning to be banded about. In 1992 The Campaign for the Accountabilty of American Bases (CAAB) was born.

CAAB, a small group of committed people relying entirely upon donations to fund the work, evolved out of the long campaign of protest at the American base at NSA  Menwith Hill, near Harrogate, North Yorkshire.

CAAB has worked in many ways to piece together the truth about Menwith Hill and other US bases here and world wide.  Some examples of this are:

For years CAAB has regularly monitored Harrogate Planning office and Helmsley for RAF Fylingdales for any new applications for developments.

They were the first campaign to find out that Menwith Hill was to be a crucial part of the US Missile Defense system; later about the role of Fylingdales. Probably like many they were unaware that Ronald Reagan’s ‘Star Wars’ (later changed to be known at the US Missile Defense system) was still being developed apace. Despite alerting other groups at the time this was not taken up.

CAAB took out a legal action in the High Court to try to stop the building of two Space Based Infra-Red system radomes. The legal action went on for about a year with many hurdles in the way.  Finally CAAB had to concede defeat with the arrival of George W Bush as the next President of the US after Bill Clinton but had learnt a great deal because of the legal action.

The Campaign involved in many arrests, charges, prison sentences over the years. There have and continue to be many struggles through the courts. This is one of the consequences when challenging and asking questions of the US Visiting Forces in the UK and wider afield.

Using the law to bring about change has been effective also in:

Challenging the police’s random use of ‘breach of the peace’;

Being successful in obtaining a High Court ruling making permissible the use by CAAB of the upside-down US Flag, with polite statements written on, as a symbol of protest.  It was an important authority.

Out of the many court cases CAAB has been involved with over the years, they have gleaned interesting and historical information through disclosure of documents from the High Court.

In 2017 this work was picked up by MHAC; The Menwith Hill Accountability Campaign.