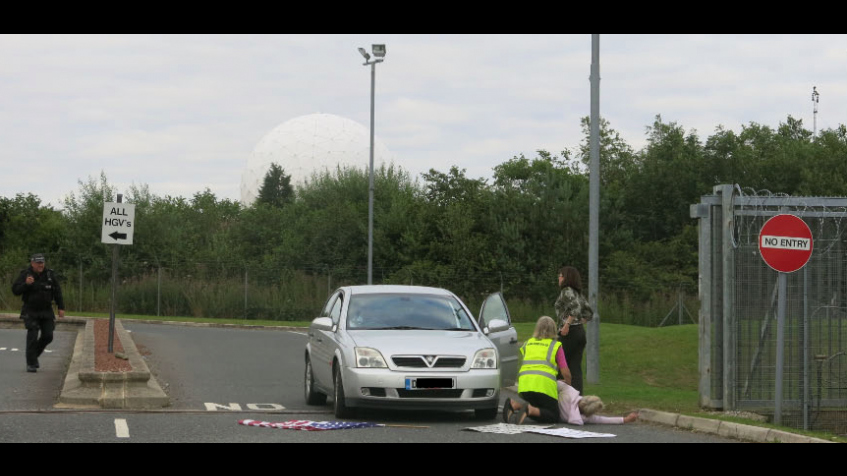 The trial of Steven Wayne Higgins took place in Leeds Crown Court from Monday 14 August to Thursday 17 August 2017. Mr Higgins was charged with causing Grievous Bodily Harm to Barbara Penny while she was peacefully demonstrating at NSA/NRO Menwith Hill (Nessfield Gate) during the weekly Tuesday pm demonstration on 11 August 2015.

Judge Cahill (Circuit Judge for North East Yorkshire) heard the case. Barbara Penny, Tim Harberd and Lindis Percy were all demonstrating at Nessfield Gate on 11 August 2015 and gave evidence at the trial.

A poor quality video of the incident was shown to the court which clearly shows Barbara Penny being struck by a car that only stopped after the impact. There were several problems with the video, not least being that it was not possible to be assured that it was being shown in real time, so things occurring on the video may have actually happened more quickly or more slowly than could be seen.

On Thursday 17 August, the Judge addressed the jury on the law and evidence heard. Judges should be – and usually are – scrupulously fair and independent when summing up for the jury. She then directed the Jury to retire and appoint a Foreman / woman. She also directed the Jury to come to a unanimous decision.

The Jury left the court at 11:45 am and had made their decision by 12:15 – that is, in 25 minutes at the most. When they returned to court and the Judge asked them if they had come to a decision as whether Steven Higglns was guilty or not guilty, the Foreman said "NOT GUILTY".

The witnesses who were present at the Nessfield Gate know what happened and know the truth as to what happened at the demonstration and what was said in court. The weekly demonstration at Menwith Hill - started in 2000 by the Campaign for the Accountability for American Bases - continues and needs your support.