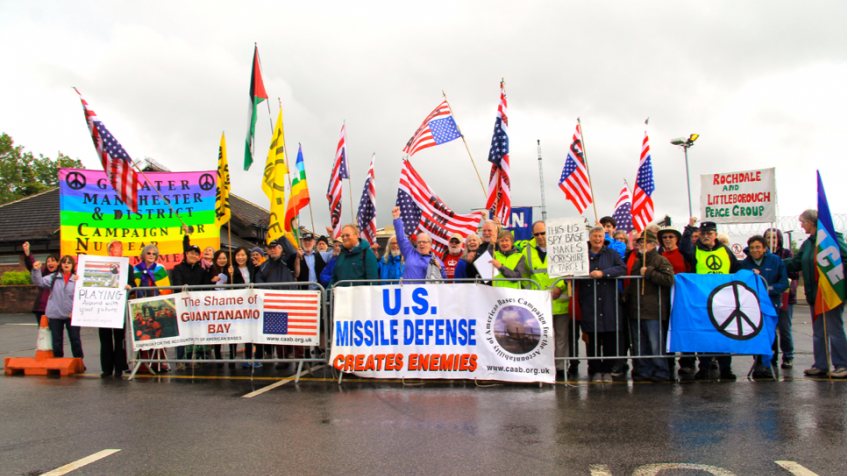 About 100 people attended the demonstration at Menwith Hill on Tuesday 4th July, at which the Declaration of Independence from America was read and a letter given to the RAF Liaison Officer, Geoff Dickson, to be handed in to the US Chief of Station, Miriam Garrant.

Those attending the demonstration came from as far away as Korea, as well as from Yorkshire, Lancashire, London and Manchester. The purpose of the demonstration is to draw attention to the fact that the base at Menwith Hill, run by the National Security Agency of the USA, is not accountable to anyone in this country. The citizens of the United States who work at Menwith Hill are able to carry out surveillance of all kinds of communications, from telephones to Social Media, without having to explain their activities to citizens of Great Britain. The information which they gather from these intercepts can be used by the USA or sold to third parties. It can be used for political, military or economic advantage, without the knowledge or consent of anyone in the UK.

Maya Evans of Voices for Creative Non-Violence spoke passionately about her experience in Afghanistan working with children affected by war. Drones have been used to target civilians in Afghanistan and their use may be planned and controlled by staff at bases like Menwith.

Dave Webb, Chair of National CND, spoke of the hope for nuclear disarmament from the talks on a Global Ban currently taking place in New York. (see latest edition of Peace News for the positive outcome of these talks which ended with 122 countries signing the accord).

Music at the event was provided by the East Lancs Clarion Choir, by Catherine Warr and by the band Bassa Bassa. Roger Harrington gave a very moving solo performance about a Leeds soldier shot for desertion in World War 1.

Regular demonstrations against the base at Menwith take place on Tuesday evenings from 6 – 7.30pm and everyone is welcome to join these demonstrations. Keep Space for Peace Week will be marked by an event outside the main gate at Menwith Hill, run jointly by Yorkshire CND and by the Menwith Hill Accountability Campaign (successor to CAAB). The event will be from 6-8pm and there will be speakers, food and entertainment.

Attachments
Reading the Declaration of Independence.doc